Portishead Bowling Club welcomes bowlers of all ages and ability

(for current news and events, please visit our Facebook page)

The 2022 fixtures will be updated as and when available.

The details of the closed season 'working parties' and the Winter social events have been issued by email.  Please contact the Secretary if you did not receive these.

(to view highlights of the 2021 season, please click here)

The Association of Portishead Bowling Clubs would like to thank Britton Associates Wealth Management Ltd.

for their sponsorship of the 2021 season

This site has two bowling greens each with its own recreation and changing facilities.

Club sessions take place every Monday throughout the bowls season starting at 10.00am. Old and new members participate in these on a regular basis and we are always assured of a good turnout. 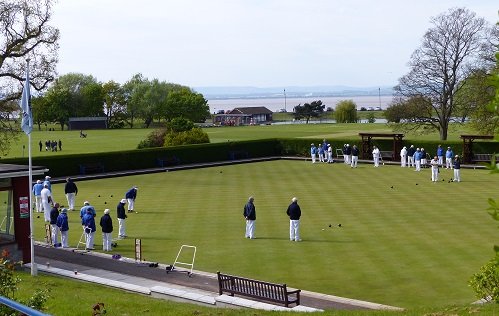 Every year we support a charity from our events and raffles.

Due to the cancelled 2020 season, St Peter’s Hospice was again the chosen charity for Portishead Men.

It was a tricky season but, with the usual fines for “wrong bias”, “wrong trousers”, “wrong shirt” and a few other bits, the Men managed to raise an

impressive £650.00. Well done Portishead Men and all who contributed.

In November Alison Spurrell from St Peter’s Hospice attended the AGM and gave a short talk outlining all the many services they offer.  Alison was

then presented with a cheque for £650.00 by Captain Richard Brake.

For the ladies, President Gill Berryman and Captain Susie Sealy chose the Wellbeing Project at Portishead Youth Centre as their charity for 2021.

Kim Jones, manager of the PYC was welcomed to their AGM, where she gave members an insight into the work they do with local young people within

the project and extended an invitation to all to drop into the Youth Centre at any time to see what is offered there.

Gill & Susie proudly presented Kim with a cheque for £1000.00, the result of members' support for fund raising events held throughout the season.

Our facilities are operated by the Association of Portishead Bowling Clubs with the purpose of enabling four local Portishead clubs to bowl in harmony on excellent greens and with a welcoming atmosphere. The main club house contains a bar and lounge with dining facility.

There are two 6 rink bowling greens both in very pleasant and enclosed surroundings with views to the Welsh coast.

The greens are maintained to a high standard providing an excellent bowling surface throughout the season.

We are pleased to welcome a number of touring sides throughout the season, and without exception, our visitors are very complimentary about the facilities we are able to share with them.

Disabled access and toilets are available for those requiring them.

For many years now the club has toured to other South Coast resorts, including; Torquay, Falmouth, Tenby, Bournemouth, Babbacombe, Exmouth, Bideford, Southsea and Weymouth.

Tours generally run from Monday to Friday in early September. We hire our own coach for the period of the tour.

Mixed games are arranged with local clubs around the area in which we are touring.

Each year money is raised for a Portishead charity, for example, in 2018 the club toured to Bournemouth and we donated to our local Great Western Air Ambulance Charity

If you would like to join our club or just receive more information, please use the contact details or the email form on either the Men's or Ladies page as appropriate, using the links below, or visit our Facebook page: